Do you ever wonder the true cost of your clothes? Not just the monetary value but also the social, environmental and human price that is paid for the production of cheap clothing.

Atomic Smash was approached by Joanna Kemp and asked if we could help them come up with a unique identity that encapsulated their campaign. The idea of the campaign is to pose the question is this The Right Label? We were given the task of coming up with something that was easy to read, easy to recognise and could easily be transferred between mediums such as Online, Print, Packaging and Clothes. Atomic Smash did this whole process as their donation to the cause.

Fairtrade Fortnight is a time to raise awareness of the needs and problems surrounding Fairtrade.

“This year the Stamford Fairtrade Group are taking a look at the National and Multinational shops in Stamford which provide us with the many clothing outlets that now dominate our shopping centre. The group will be researching the way these companies source and buy the clothes they sell and making the results known to the Stamford shoppers. The vigil held outside Edinburgh Woollen Mill store after the devastation caused by a fire in one of their suppliers factory has been the catalyst for this years campaign. The group feel it it important that customers are aware of the background behind the clothes they buy. The campaign, called “THE RIGHT LABEL?”, starts in Fairtrade fortnight and will go through until One World Week in October when the results will be on display in the Arts Centre exhibition. Look out for group members in the High Street during the fortnight and have a chat with them, get the group’s facebook and website details the follow the campaign. “

I personally and Atomic Smash believe in trying to keep things local and buying ethically. We were over the moon when we had an independent mayor elected for Bristol recently.We are always happy to help out with projects and campaigns for charities, if you want advice or have a question please get in touch.

This is the final logo that will be used on the campaign, a complete set of brand guidelines were also provided free of charge. 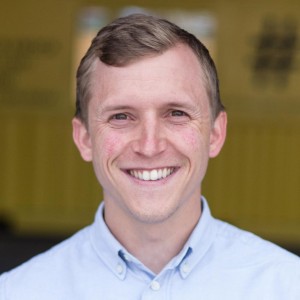 Piers is a co-founder of Atomic Smash and heads up the user experience design and project management in the studio. He is also the best contact for any new business enquiries.