The end of an era: A summary of my time at AS

Two years of Atomic Smash have flown by. In the time I’ve been here I’ve learnt how to use Sketch from scratch, gained an understanding of how the business is run, seen the company grow, whooped Colin’s butt at ping pong more times than I count, spent too much of my salary at Harts Bakery but most importantly worked with some great people – both the team and clients.

So, where and why am I going?

Is it a bigger agency? A smaller studio? Well, it’s neither. I’m taking the plunge (as everyone seems to call it) into the freelance world of illustration. Having studied illustration at Plymouth University and spent many of my weekends and evenings working with my own clients, I figured it was time to hang up my metaphorical design career coat (for now anyway) so I can focus purely on building my own creative business.

Being apart of a smaller studio has been great. My previous job had over a hundred employees which was a tad excessive for my liking. Making up a sixth of the workforce means that not only my voice is heard but also plays a big role in how the company progresses.

Having others to talk to, regardless of whether it’s office related or just pure chit-chat, is going to be sorely missed. The critiquing of designs, development advice for building emails and getting excited about new technologies are just a few of the moments you can’t experience on your own and really builds up one’s own character, as well as their skill set.

Clients at Atomic Smash are different than my illustration clients, and that’s a good thing. There’s a much more collaborative process to it and it’s not as simple as illustration where they may simply like the colour. They have a deep understanding of their customers and is vital for them to feed into the design process as much as possible.

What have I learnt?

I came from a company that had a traffic manager which told me what to do. So when I first arrived at Atomic, I hit the ground running when it came to organising my time. Luckily I enjoy the self management and productivity aspect of the job and allows me to work in a way that suits me (and the team) with the tools I want to use.

“Should I use this colour?” or “does this wireframe flow?” were common questions at the start. As I was the only creative, I had to take responsibility for my designs and learnt to be decisive about my choices.

Though the team had lots of positive critiques, some of the decisions I would contend. Not simply because I’m a pain to work with (another blog post perhaps?) but because I believed my choice was correct. Yes, my design might take a little while longer to develop but if it improves the user experience shouldn’t that be the winning factor? Sticking up for myself was an unexpected skill I acquired but I tried not to be too headstrong with it.

Though I’ve learnt some important life lessons and skills, I have picked up some nasty habits.

Being the only designer, as mentioned earlier, has its benefits but comes with the danger of getting into the same routine and making stubborn decisions. I think it’s important to ask the team for opinions and make sure I don’t stray too far from the brief and what the project requires me to do as a designer. Putting the client’s interests over my own has been a steep learning curve but sometimes you have to bite the bullet and suck it up, even if it goes against your own beliefs.

I can’t say having an office coffee subscription to Extract has helped with an addiction to hot drinks or to trying to keep my teeth whiter than Mitt Romney in a snow storm but I guess it’s an occupational hazard.

If I had to choose a project I’ve enjoyed the most, it has to be FD Works. It was the project where I felt that I had pushed Sketch to it’s maximum potential and allowed for more time to be spent on creative and less on asset management.

Using a huge library of symbols, the site almost built itself and almost became its own self sustaining design. By simply dragging the element I needed onto the page it would take a few mere minutes to create a page and was stupendously simple to update assets once Jon and the team had fed back.

So, what are the precious things I leave to my heir – my disciple?

Firstly, and most importantly, my Sketch workflow. Formed through weeks of trial and error, and research. The app has truly evolved over the time I’ve been using it and has become a valuable tool to not only me, but the company as a whole. Symbol management, the Craft plugin and the newest kid on the block that is React Sketch.app will hopefully grow to become even more an indispensable asset to the my successor and guys at Atomic.

Secondly, my knowledge of HTML emails, the troublesome task of building emails for more mail clients than I can count sure is a pain, but as a marketing tool, it’s as good as it gets. Even though it throws up a lot of challenges it was the perfect starting point for learning how to code and served as my foundation for designing for the web whilst knowing the limitations of digital design.

And lastly, I leave my table tennis paddle – the paddle that has taken me to office glory in beating everyone at least once – and £17 desk mat from IKEA. 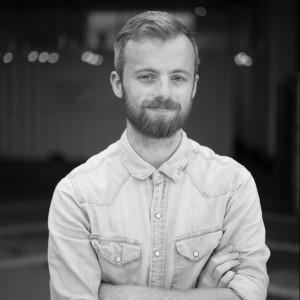 Tommy ensures there is always a high level craft across client projects. His creative quiver has also extended beyond the realms of digital design – working on a feature film, illustrating for various global magazines and specialist printing.